CHARLES CITY — The start of the high school golf season for the Charles City Comets was right on schedule.

Which puts them well ahead of schedule compared to last year.

“We were able to lower our scores throughout the season without having much of a spring to practice in,” Charles City girls head coach Eric Johanningmeier said of last year’s “white spring”.

“Hopefully, with a better spring this year, we can improve even more.”

“Marissa is our top player going into the season,” Johanningmeier said. “As for the other girls … hopefully they’ll keep playing and keep improving, and we’ll see what happens.”

Charles City junior Hope Slinger might be a potential breakout star as she shot a 54, which was second to Daniels in medalist honors.

Jadyn Hegtvedt carded a 58, and Kara Hoffman and Sara Mitchell each shot 61 scores to round-out the Comets’ marked total of 222.

The Charles City boys team, which was undefeated during the regular season last year, won its triangular with a team score of 185, well ahead of Osage (204) and Nashua-Plainfield (205).

Leading the way for the Comets was freshman Trevor White, with a medalist score of 44.

The Comet girls will be in Waukon on Tuesday for a meet before hosting New Hampton on Friday. The Comet boys will face the NH Chickasaws on on Friday at the New Hampton Golf and Country Club.

For Charles City home course, Cedar Ridge, the season is also starting much earlier this spring as Tuesday is the 18-hole course’s official opening day. 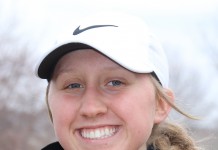 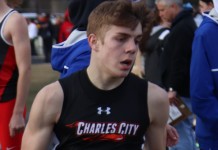 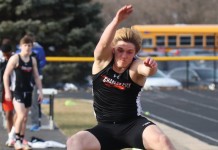